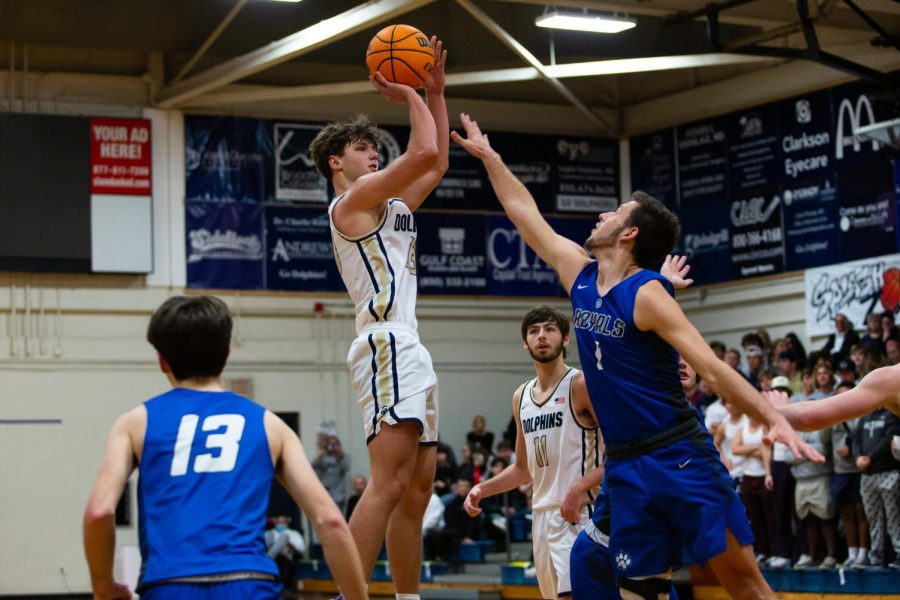 The boys’ basketball team also rode the district wave beating Booker T. Washington 67-52. The boys eventually lost to Fletcher, from Neptune Beach, in the Regional finals in an emotional overtime.

Fletcher won the jump in overtime with the score tied 58 to 58. Their tactic: hang onto the ball and run out the clock, leaving the Dolphins no time to respond. Max Schneidt remarks, “I was really frustrating to hold onto the ball for so long. We could have done a lot of things differently to change the outcome of the game.”

There were reports of some taunts from some of the Fletcher group after the game. “It was disappointing to lose on a buzzer beater, especially after they held the ball the whole time,” explains Daniel Selogy.

Senior Night was a blackout and a game the Dolphins wish they could have back. In a gme against Navarre, Freshmen won 41-38, JV won 77-31. The Varsity Dolphins lost 61-58. Max Schneidt said, “It was a rough heartbreaking loss, and we did not play well enough.”

Daniel Selogy mentioned, “We always have to lose to Navarre– it was one we wish we could have back.”

The Dolphins look to circle back and make a bigger statement next year. Finishing the season with a 21-7 record and have a 0.75 winning percent. In their league they are 4-2, at home they are 12-3, and away they are 9-3. In the state of Florida our Dolphins are ranked #102. But they are ranked #19 in the Florida Division 6A.